View source
watch 01:36
We're Getting Mutants in the MCU - The Loop
Do you like this video?
Play Sound

Hal Stewart was a cameraman for Roxanne Ritchi. Following Metro Man's demise, Megamind improbably chooses Hal to become his new rival, making the newly christened "Tighten" Megamind's ultimate arch nemesis. Hal soon finds that being bad is much more fun which leads to Metro City's new superhero to slowly but surely become the most dangerous supervillain of all due to his abilities. He was defused by Megamind at the end of the film.

Hal used to work as a cameraman for Roxanne Ritchi, Metro City's new reporter. Hal always tried to get a date with her but she always avoided him. He later accompanies Roxanne to Megamind's lair when she decides to find out what Megamind plans for the city. While Roxanne fights with Megamind over the Defuser Gun which contains Metro Man's DNA sample, the gun is accidentally fired and the serum is injected into Hal. Megamind, disguised as Hal's "space dad" convinces Hal to become a superhero named "Titan" (although he later changes it to "Tighten") but he only accepts when Megamind claims that the hero always gets the girl (Roxanne).

Once his training is over, Hal tries to woo Roxanne with his powers by picking her up, throwing her in the air and catching her, resulting in Roxanne, once again, rejecting him. When Megamind goes to his apartment after he fails to show up for their fight then Hal being overwhelmed with power tells him he decided he could be a supervillain instead. Disgusted, Megamind provokes Tighten by revealing he is both the "space dad" and Bernard. Utterly furious at the fact that Megamind was the "intellectual dweeb" who got Roxanne's affections, Hal attacks with a vengeance, however unlike Metro Man, he has no qualms with outright killing Megamind, and Megamind is forced to flee for his life. Hal then starts to destroy Metro City in revenge for Roxanne spurning him and bottled-up resentment from a lifetime of rejection.

Later, Hal kidnaps Roxanne to get his revenge on Megamind. Megamind (disguised as Metro Man) shows up and manages to intimidate Tighten into fleeing the city, until he accidentally calls Metro City "Metrosity". After a beating from Tighten and getting flung into the air with the Defuser Gun (apparently to his death), Megamind defeats him by using his Dehydration Gun to safely land into a fountain in Metro City's main square, and uses the Defuser Gun to remove Metro Man's powers from Hal just before he can incinerate Roxanne. Hal ends up arrested and locked up in Megamind's former cell.

Hal is short and obese with short red hair and brown eyes. When he gains Metro Man's powers he also gains his same height and body shape, his hair is also longer and curlier but his face and eyes remain the same.

Hal is an incel. He is immature, childish, self delusional and misled. He is seen by most as either entitled, odd or awkward.

After being accidentally infused with Metroman's DNA, Hal gained Metro Man's powers and abilities. It was later taken away by Megamind in their final battle. 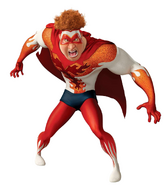 Hal uses his powers for the first time

Hal dances in his cell
Community content is available under CC-BY-SA unless otherwise noted.
Advertisement